More than 50% of all modern games are written on the Unity engine, so the profession is not only interesting, but also promising – the game industry is showing steady growth. For work, a higher technical education, as well as courses in Unity and programming, will be useful.

Unity is a cross-platform development environment, on this engine such legends as “N.O.V.A. Heritage”, “Knock-knock-knock”, The Room Two and many others. The Unity engine is used to solve various problems, but games are the main and most popular direction.

Unity developers are in-demand specialists who can work in large companies or create their own products as part of startups. Most often, a developer is part of a large team, in which each specialist oversees his area of ​​work. 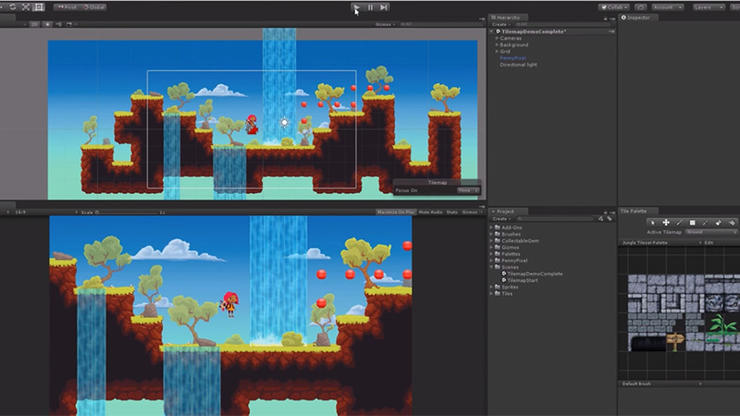 Features of the profession

A Unity developer should not only know the features of the engine, but also programming languages ​​(C# is a priority).

He has the following responsibilities:

The developer must be able to interact with the team, delegate tasks and constantly learn. The profession has an average entry threshold, it can be mastered in courses, but after them you will have to work out practical skills.

A Unity developer should learn foreign languages ​​that will help expand the job market and look for jobs in the US, Europe, and other countries.

Pros and cons of the profession

The developer implements the technical part, so employers give preference to specialists who have specialized higher education, for example, in university programs:

Simplicity, versatility, flexibility are the key features of the Unity game engine

Unity is one of the most popular game engines in the world. It is appreciated for its simplicity – the engine has a low entry threshold, so it is accessible to beginners, versatility – it can be used to make a game for any modern popular platform (PC, iOS, Android, Nintendo Switch, PlayStation 4 and 5, Xbox One, Series X| S), flexibility – Unity can be customized for a specific project to make development as efficient as possible.

There are many open source engines, but the most popular and largest of them are Unity and Unreal Engine 4 (UE4). The fundamental differences between the two engines lie at the programming language level – C# for Unity and C++ for UE4. The first is more strict and has a lower entry threshold, while the second provides more options, but requires more discipline from the developer.

Due to the peculiarities of the engines, there has been a division in the industry: if a company develops an AAA game, then Unreal Engine is preferred because it is more productive and has more ready-made functions, while Unity is most often used for indie projects or mobile games – the engine has fewer stock functions and it can be described as a sandbox from which to create a workshop suitable for working on a particular genre or series of games. 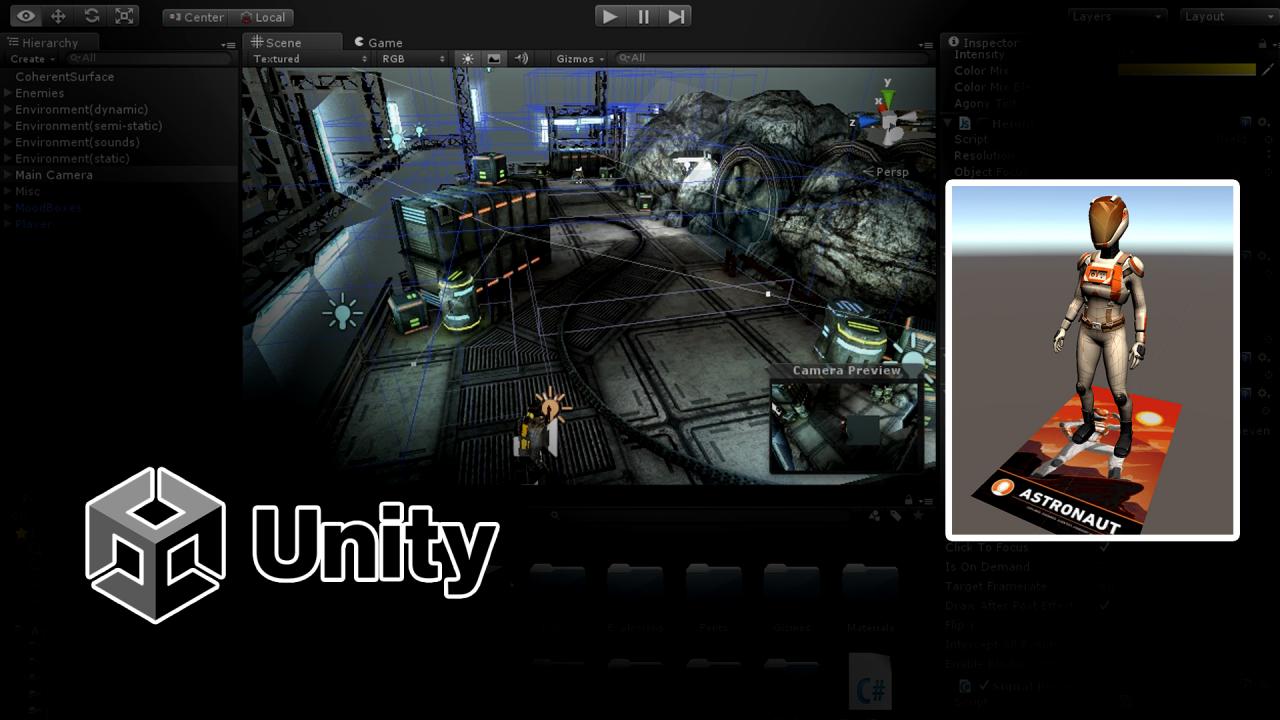 The main advantage of Unity is simplicity and flexibility.

The flexibility of Unity allows companies to quickly and with a minimum of investments adjust the engine to their own needs – they can expand the set of functions for a specific project.

This applies to both scale and genre – Unity is equally well suited for creating a small puzzle, and for a huge classic RPG.

Unity is suitable even for solo development. The creator of the meditative adventure game A Short Hike, Adam Robinson, made it alone in just four months – before that, he often participated in game jams and just experimented with mechanics, so by the time development began, he was well versed in the engine and its tools.

In addition, the engine store has a large variety of assets – both paid and free. You can find both simple 3D models and simple mechanics, as well as complex systems that will help implement individual game aspects: artificial intelligence, inventory, and so on.

Nevertheless, you should not count on the fact that it will be possible to make a full-fledged high-quality game out of ready-made assets – such a project will look more like a Frankenstein’s monster sewn from incompatible parts.

In addition to Unity and Unreal Engine 4, there are many game engines, but they are either more difficult to master, or have fewer functions and limit development opportunities, or are game designers – programs that can be used to create a simple game without special skills and long training.

Such engines and programs are not particularly popular among professional developers: either single enthusiasts or small indie studios usually work with them.

Another competitor to Unity is a custom engine written specifically for the project. But usually only large companies that are able to maintain a large staff of native programmers can do this.

In smaller companies, as a rule, they create their own add-ons and libraries for Unity – this is necessary for the convenience of developing a particular project. And very small teams most often get by with the stock set of engine features, as this frees up energy and resources for developing the game itself.

Unity supports the Bolt visual programming system, which is a plus for those who do not specialize in programming

Unity is friendly even for those who do not know C # at all – the engine has long supported the Bolt visual programming system, which helps to write game logic without code. We can say that Bolt is an analogue of the Blueprints system in Unreal Engine 4.

This means that those developers who do not specialize in programming can work in Unity. For example, Bolt allows game designers to quickly prototype their ideas in order to immediately test the mechanics in action, and level designers to set up triggers on locations on their own.

Nevertheless, Bolt does not lower Unity to the level of simple constructors – it’s all the same writing logic, but in a more understandable and friendly way.

One of the most important advantages of Unity for beginner developers is that a huge community has formed around this engine, ready to share their experience – there are many detailed lessons and all kinds of tutorials on the Internet.

In training, questions often arise that only practitioners can answer. In addition, there are official materials that will help you overcome many obstacles. Here are the main sources:

The official website of Unity, where there are excellent courses that allow you to get acquainted with various aspects of the engine.

On StackOverflow, you’ll find a solution to almost any problem you may encounter while using Unity. And if you do not find the answer, then you can ask a question, and experts from all over the world will try to help.

Forum in Russian, where there are experts of different levels who are ready to discuss engine news, share secrets or help with solving an interesting problem.

How much do Unity developers earn?

Statistics show that the profession of a Unity developer is now in demand in the labor market. For example, in mid-November there were more than 1,250 vacancies on hh.ru across Russia for the query “Unity Developer”. So the Unity developer has a lot of options when choosing a place to work.

Unity has become the most popular game engine due to a number of advantages:

Unity is ubiquitous in the gaming industry – this engine is used for both large console games and small mobile projects. In addition, you can make a game on it alone. Thanks to this, a Unity developer has ample opportunities when choosing a place of work – he can equally easily go into indie game development and into the field of mobile games.

Pros and cons of the profession

If I systematize my experience, I can highlight the positive aspects of working in game development:

Good salary, but less than in enterprise development.
Rock and roll. Most likely, you will enjoy what you do.
Creative self-realization.
And the negative ones:

Burnout. Some developers even stop playing games – they lose interest. Personally, I still have an interest, but there is not enough time.
Crunchi. I think everyone has heard these stories about pre-release rework and beyond.

Yes, this happens, and not so rarely. I remember only a few projects that were done calmly and on time. More often the situation is reversed: due to the fact that much is not yet ready for the release, sometimes you have to literally spend the night at work. At the same time, companies do not always pay for overtime.

The two main shareware popular engines in the gaming industry are Unreal and Unity. How many copies were broken by their supporters in their time in endless holy wars to find out which engine is better …

I like both engines. I settled on Unity because of the greater job search potential and freelancing opportunities, at least in Belarus. It seems to me that very rarely AAA games are ordered to freelancers.

Unity is becoming even more used primarily due to the huge popularity of mobile games. You have heard about many: Pokemon GO, HearthStone, Star Wars: Galaxy of Heroes, Albion Online.

I think now is a great time to become a Unity game developer as the industry is booming. Many companies that have never dealt with games before are starting to develop their own game projects, hence the increased interest in developers.

Speaking specifically about Unity, it seems to me that right now, novice specialists in this field have a great opportunity to quickly get their first job.

At the moment, hyper-casual games are very popular, for which employers are ready to hire newcomers. In addition, many companies employ juniors for larger projects.

The best way to get started in game development with Unity is to learn C#. In addition, you need to be sure that you have a technical mindset. There was an experience when a cyclist was trained by me, but the person had a character and he forced himself to learn. Unfortunately, this is rather an isolated example, a survivor’s mistake.

If you prefer to draw characters or invent them, then most likely the profession of a developer is not for you. However, I never give up on anyone: I believe that strong motivation and desire will bear fruit. In the end, I myself went through this path – from a 3D artist to a Unity developer.

I recommend watching any video tutorials on the topic at the start, trying to understand the process, writing code for many hours – to see if you like spending so much time studying the details of implementing game mechanics. And does it work. If the answer is yes, then go to gamedev.